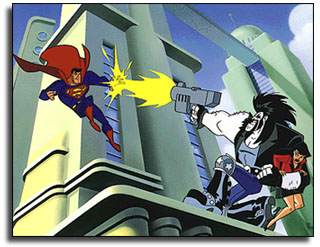 The classic Superman series has inspired the return of Superman in the new Warner Bros. animated television series. The original artwork, created by the same animation talent who worked on “Batman: The Animated Series” , was used to recreate this classic scene of The Man Of Steel flying through Metropolis with the Daily Planet building in the background.

This powerful moment captures Superman fighting off a blast from nemesis Lobo’s gun who has come to Earth not to kidnap Lois Lane, but to trap and kidnap Superman himself.