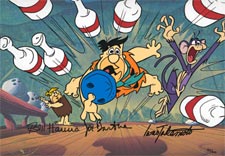 It could be strike for Fred…or maybe a gutter ball. Barney watches as Fred flies down the alley. Inspired by the hilarious hijinks of the original seriesm Iwao Takamoto created the original drawing for this edition.
Prior to The Flintstones, The Ruff and Reddy Show actually launched the Hanna Barbera studio into its incredible creative dominance of animation for television in 1957, followed by the Huckleberry Hound Show in 1958 and then the premiere in 1960 of the stone age hit The Flintstones. The popularity of space age events and UFO’s at the time inspired the studio to create another family situation…but in the future… The Jetsons premiered in 1962.

This fabulous Limited Edition Cel was created by studio artists inspired by artwork from the original production and is signed by small screen legends Bill Hanna and and Joe Barbera, and Iwao Takamoto.