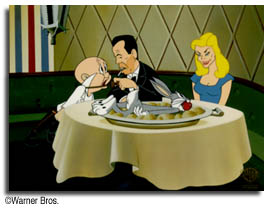 As Mocrumbo waiter Elmer Fudd takes the heat for failing to round up some fried rabbit for Mr. Bogart, Bugs Bunny serves himself as the main course for Lauren ‘Baby’ Bacall in this classic scene from the 1947 Merrie Melodies Slick Hare. Directed by Friz Freleng, Slick Hare features cartoons of several of Hollywood’s leading celebrities. Warner Bros. artists were inspired to create this moment from actual artwork used in the original cartoon. The edition was approved by the Estate of Humphrey Bogart and bears the signature of Lauren Bacall.