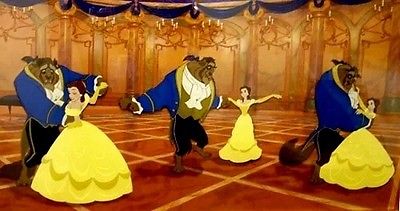 Among the most prized of all Disney hand-painted editions, scenes of the Ballroom Dance are among the most sought after. Destiny’s Dance features a progression of images from the dance scene in Disney’s modern classic. Beauty & The Beast marked an important milestone in animated films utilizing computer ink and paint techniques. It was the first animated motion picture ever nominated for the Academy Award(R) for Best Motion Picture of the Year.
This fine art Hand Painted Limited Edition Cel captures the romantic dance progression in the Beast’s castle