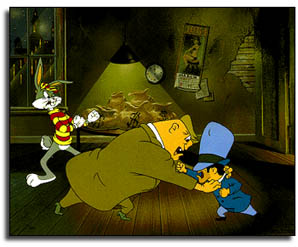 “Someone oughta show them that crime doesn’t pay, and it looks like that someone’s gotta be me.”
This outstanding hand-painted limited edition cel was inspired by the 1954 and 1957 animated shorts “Bugs and Thugs” and “Bugsy and Mugsy”, both directed by Friz Freleng and animated by Virgil Ross.